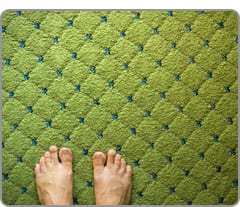 Nylon continues to hold over half the carpet market. Nylon, a polyamide polymer, has excellent resilience (the ability of a fiber to “spring back” to its original configuration), abrasion resistance, mildew resistance, and very good color retention. It can be acid dyed or solution dyed, which is discussed later. On the downside, it is melted by very strong acids such as hydrochloric acid toilet bowl cleaners, is easily stained by acid dyes (the dyes in most foods and drinks), and is bleached out by chlorine bleach. Nylon comes in two forms: Type 6,6 and Type 6.

Type 6,6, invented by Dr. Carothers of DuPont in 1938, is formed by the reaction between adipic acid, which has 6 carbon atoms, with hexamethylene diamine, which also has 6 carbon atoms. The advantage of Type 6,6 is that it has greater stain resistance than Type 6, is 12% harder than Type 6, and has a slightly higher melt point. This is the type of nylon used by Invista (formerly DuPont) and Solutia (formerly Monsanto).

Type 6, invented by Paul Schlack in Germany in the 1930’s, is made by co-polymerizing caprolactam, a 6-carbon molecule. This is the type of nylon used by Allied Signal and BASF. This type of nylon has a slightly lower melting point than

Type 6,6 nylon, but it has superior light degradation, better dyeability, elastic recovery, fatigue resistance, and thermal stability. While these are the pros and cons of type 6,6 versus type 6 nylon, there really isn’t enough difference to matter very much – it’s more a matter of marketing than anything else. There have been tests done that indicate identical carpetperformance when all aspects of the carpet construction such as yarn size, color, construction, etc. are exactly the same.

There are five generations in nylon fiber:

First generation: The first nylon fibers. These performed poorly because the soil could be seen through the fiber (unlike wool) and because, due to the round cross-section of the nylon fiber, the soil was actually magnified. As a result, apparent soiling was extremely rapid compared to wool. Later, delustering agents such as chalk were added to eliminate this problem, but the fibers had a dull appearance with this treatment.

Second generation: This is first generation nylon fiber with modified cross-section for soil hiding, such as tri-lobal. This eliminated the round shape problem causing the magnification problem.

We are now in the sixth generation.
Source